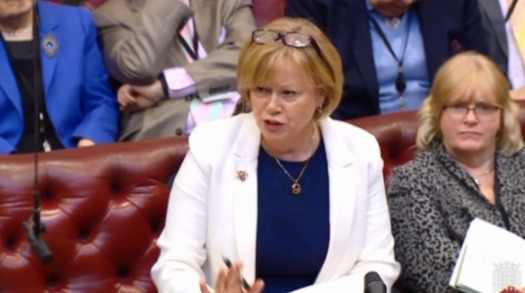 We are considering this legislation in unprecedented circumstances. Whatever ones views on Brexit, this country has embarked on the process of fundamental constitutional change with deep and far reaching consequences.

Brexit is a process, not an event. And not just a Government process but a Parliamentary one that will involve at least 10 Acts of Parliament, around 1,000 Statutory Instruments, with numerous statements, debates and committees examining the detail.

Yet, at a time when this country really needs strong and stable government we have instead consistent and persistent reports of a weak Prime Minister, buffeted from one position to another, as she tries to bring order to the warring factions in her cabinet.

So before us is a Bill that started as the ‘Great Repeal Bill’, then became just ‘The Repeal Bill’ and is now the EU (Withdrawal) Bill.  None of which do what it says on the tin. A better title might have been the EU (Transposition and Interpretation) Bill.

It’s not just a quibble over semantics – but recognition of the importance and technical nature of the legislation before us, and also why we are so concerned that it should be fit for purpose.

Yesterday, our Constitution Committee published its Report and we’re grateful to them for doing so in time for both today’s debate and the weeks of the Committee ahead of us.

Whilst the principle of whether or not we leave the EU is for many ideological, the detail of this Bill is not.

This Bill is not about leaving or even just about how we leave the EU.  It’s also about how we maintain domestic legislation in the future. It introduces a third category of legislation, in additional to Primary and Secondary, of retained law.

That is the body of law that currently applies in the UK through our Membership of the EU but introduced in different ways, and that the Government now seeks to convert into domestic legislation. It is a relatively straightforward concept, but the scale and the complexity is unprecedented.

Our Constitution Committee reports that whilst the aims of the Bill are valid, as drafted it is constitutionally unacceptable. Amendments, however, could address the deficiencies whilst maintaining the fundamental principles – particularly the sovereignty of Parliament.

This Bill seeks to ensure that, following exit from the EU, there is legal continuity and certainty in our legislation.  It seeks clarity in the application of laws on environmental protection, on consumer protection, on rights at work for example.

And we’re grateful to the Committee for their pragmatic suggestions for amendments to achieve the objectives of this Bill. We all want to avoid this becoming a fiendishly complex process that weakens both parliamentary sovereignty and legal protections that our citizens rightly take as granted.

During the Article 50 Bill, the Prime Minister constantly argued that she wanted a ‘clean bill’, as if somehow amendments made legislation dirty and impure. Listening to the debates in the other place, and also the conciliatory comments from the Noble Lady Leader and the Noble Lord the Minister on television at the weekend, I hope we have moved on from such ridiculous notions and the accompanying sabre rattling we’ve seen before.

The Government itself has pledged to table amendments to address issues such as the devolution settlement and MPs across the Commons have said that this House can be helpful on unresolved issues.

We’ve even seen rare harmony on the Conservative benches as the former Attorney General Dominic Grieve, the Father of the House of Commons, Ken Clarke, and the Brexiteer, Sir William Cash, all urged Your Lordships’ House to deal with outstanding concerns including the future role of judges in interpreting EU derived law.

And I welcome the compliment from Leader of the House of Commons, Andrea Leadsom last week when she said, that Noble Lords “play a very important revising role, for which we are grateful and they have expertise that we in this House benefit from” (Hansard 25th January)

We welcome that opportunity. But just before some get carried away, a brief constitutional reminder that any amendments passed by this House provides an opportunity for further consideration by MPs, who have the final say.

For those that criticise even that role, I want to re-emphasis a point I have made before. The process of Brexit is too important and complex to be left to those who have no doubt. Because only doubt brings questioning.  And it is only through questioning that we examine an issue enough to get the detail right.

Too often, the Government appears to put off tough decisions. For example, as we’ve heard in our questions, the financial services sector is crying out for the Government to publish a future partnership paper, to provide some certainty to allow for future planning. Yet, none has been forthcoming and ministerial responses are complacent at best.

With 19 months passed since the referendum, it is unacceptable that the Government has not yet got a grip of the issues facing Northern Ireland, our crown dependencies and our overseas territories. We have not yet seen a credible way of solving the Northern Ireland border issue given the Prime Minister’s flawed ideological position against a Customs Union.

We still don’t know the Government’s plans for the future of Gibraltar and even yesterday Noble Lords, the Minister sidestepped the question of a potential Spanish veto on its inclusion in the new UK-EU relationship. Even now the Cabinet still hasn’t had that essential discussion on our future trade relationship with the EU.

These issues can’t just be popped into the ‘too difficult’ box with the notion that somehow, we just have to Leave and it will be alright on the night.

It’s rare, and it may never happen again, that I offer sympathy to the Chancellor of the Exchequer Philip Hammond.  But the public attacks on him from his own party, for stating a moderate view of how we manage future trade with the EU27 countries are absolutely shocking.

My Lords, the time for slick soundbites to pacify extremists has long since gone. Instead of vague superficial statements of a ‘Global Britain’, ‘Brexit means Brexit’ and now the appalling ‘Buccaneering Brexit’ we have to deal with the reality and the nitty gritty of the detail. That is the test for this Bill and the Government.

I’m grateful to the Noble Lady for her words about a new committee for dealing with the massive increase in SIs and look forward to discussing further.  We called for such a Committee and consider it essential. But I’ve also raised with her and others about the need to do more.

Given the timescale, and the volume of legislation, I’ve suggested that early drafts of SIs are published for consultation purely on accuracy, before being brought to Parliament.  There’s no delay and it provides an extra layer of inspection to ensure the detail is correct.

I should also say something about the amendment in the name of My Noble Friend, Lord Adonis. A similar amendment was considered by Your Lordships House when we debated the Article 50 Bill, and I suspect we may have another in later stages of this Bill.  Although a further referendum is not something I am attracted to at this stage for a number of reasons, I really don’t think it is an appropriate amendment for Second Reading or that it fits into this Bill, given the nature of the issues before us. Should he put it to a vote tomorrow, I don’t intend to vote.

This is not the Bill that would have been brought forward by a Labour government. So, I want to share, key, but not exhaustive, areas where we consider changes are needed to ensure good governance and the maintenance of legislative protections for our citizens.

When My Noble Friend Lady Hayter speaks tomorrow evening, I sincerely hope the Minister will be able to confirm that he is not under orders to return a so-called ‘clean’ Bill with no amendments to the other place other than his amendments.

Like many others in YLH, I’ve carried the Ministerial folder, with its pages and pages of briefing – The Q & As, ‘Lines to Take’ and notes on ‘elephant traps’.

But all too often the first line of advice on any amendment says in capital letters, at the top of the page, in bold print: ‘RESIST’. We’ve all been there.

I know that he will want to listen to the House and to different points of view. Can I urge him to see this as a real opportunity for the Government to avail themselves, as Andrea Leadsom said, of the genuine expertise that is on offer.

My Lords, I conclude with a final appeal to the Government for some certainty: