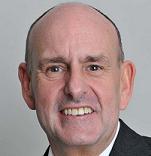 Who has not been moved over the past few days by the tributes to the extraordinary and inspiring Jo Cox.  A rising star that was already shining so brightly in Parliament and whose talents, energy and humanity will be so dearly missed not just in Westminster or Batley and Spen but throughout our nation. I have also been moved by the dignity of her husband, Brendan – whose grief and that of her two young children we cannot begin to imagine – in dealing with this tragedy.

Only the day before Jo’s murder, her family had waved to her from a dinghy as they set off up the Thames to protest against Nigel Farage’s UKIP ‘flotilla’. As I watched the latter on the choppy waters, I thought of the turbulence the country would endure if the result of the EU referendum is a vote to leave. Those on the Brexit boats believe they are sailing to Utopia but I fear the real destination will be an economic version of the Bermuda Triangle – except the destructive forces will not be supernatural but self-inflicted.

The fear of the unknown will have immediate consequences. Many consumers currently with money to spare are likely to reduce their spending considerably, thinking twice about buying a new car or building a home extension. Those meanwhile, who had planned to borrow will hold off, worried about higher interest rates or job security.

Businesses, like consumers, are likely to put off investment decisions. Some may even try to offload assets, until they had more certainty of future trading conditions. Responding to lower orders and sales from the domestic market, they may also – reluctantly – cut their workforce. This would lead to a reduction in GDP and increased unemployment.

The strength of the pound would weaken as the financial markets react to uncertainty – perhaps helping UK exports in the short-term only to be dwarfed by trade tariffs in the long run. At the same time, our weak currency would make imports, even the much discussed German cars and French wine and cheeses, more expensive to the British consumer while pushing up inflation rates.

We know too that many foreign banks, fearing that London will lose its passporting rights to the EU and the Eurozone, will quickly and considerably reduce their footprint in the UK. They will move operations, initially to existing offices, elsewhere in Europe.  Leading to job losses in banking, insurance, accounting and other financial services and reducing our surplus in service. As all of these factors begin increasingly to take effect on our economy, pressure will be placed on government ministers to cut a deal with the EU. With a weaker negotiating position overall, a bleaker outlook is certain.

So as the Brexiteers sail towards their Utopia, it is the British people who will suffer from greater unemployment and higher interest rates and inflation than we have now, lower GDP and investment, and a weaker pound. And all the indications are that things can only get worse. A deeply divided Conservative government fighting within itself, sending battle fatigued ministers to deal with a hardened attitude from EU leaders who will feel concessions already made to the UK have been thrown in their faces. Choppy waters for us all.

Lord Charles Allen of Kensington is a businessman, broadcaster and Labour Peer in the House of Lords