Make a stand, and deliver 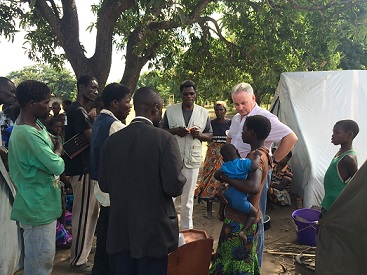 “As we embark on this collective journey, we pledge that no one will be left behind.”

These are the bold words that UN Secretary General Ban Ki-Moon hopes will be endorsed by world leaders when they meet in September to build upon the Millennium Development Goals. A post-2015 agenda to “free the human race from the tyranny of poverty and want and to heal and secure our planet for present and future generations”.

I met Maria three weeks ago in a displaced persons camp in Chikwawa, Southern Malawi. She and her one-year-old son were left homeless by flooding in January. They have nothing. No home, no clothes, no cooking utensils, and no seeds to start growing food again. And because of Maria’s status, and her child’s disability, they will face challenges for years to come.

I am currently raising money for those left homeless due to Malawi’s worst floods in recent memory, and for other projects providing opportunities for the country’s youth. My ‘Live Below the Line’ challenge ends tonight. I hope it has raised awareness and I am certain the funds raised will make a small but important difference. I am also pleased the end of the challenge coincides with a Lords debate this evening on the post-2015 Sustainable Development Goals, because charity is not enough.

This year is a big year for sustainable development. For the first time there could be co-ordinated global agreements on development and climate change, with the finance to support the former and counter the latter.

Next month, governments will meet in Addis Ababa to agree the financial commitments that will underpin the new goals, to be agreed – hopefully – by the UN General Assembly. And in December, at the Climate Change Summit in Paris, there will be the chance to agree real action to avert the environmental damage to our planet that is undermining efforts to raise the opportunities of people everywhere.

The draft post-2015 goals do address the big issues avoided by the UN back in 2000. Peacebuilding and tackling the causes of violence, insecurity and injustice; disaster risk resilience, to avoid extreme weather events destroying years of development and progress; and good governance, accountability, and human rights. These are all at last recognised as central to truly sustainable development. The commitments to universality, to the most vulnerable and excluded, and to gender equality are fundamental to beating inequality. The ambition is clear.

These wise words have been built on meaningful consultations and consensus building. The UN team have done well to get this far. These final stages are crucial and the UK is at the centre of the negotiations to secure an ambitious plan. So far, we have delivered on aid and engaged well on tax transparency and climate change. But this is the time to really step up, and our government must commit time and diplomatic effort.

The Chancellor should commit to attending the Addis Summit and lead the world’s Finance Ministers towards new commitments on tax transparency and capacity building for domestic revenues, alongside development aid. Development Secretary Justine Greening should insist that the warm words on gender equality and women’s rights are matched by stronger targets and firm commitments.

And in this year of all years, when the underlying principles of Magna Carta are celebrated, the UK should lead the demand for regular monitoring of progress towards meeting the goals at the national level, by independent bodies and by elected parliaments, based on accurate data and real evidence.

We have come far in recent decades. Millions of lives have been saved from disease and hunger. Millions more go to school and have clean water. But millions still live in fear, in extreme poverty, with discrimination and with little hope. For them, it is time to deliver.

Lord Jack McConnell of Glenscorrodale is a backbench Labour Peer in the House of Lords. He is currently taking part in UNICEF’s ‘Live Below the Line’ campaign.