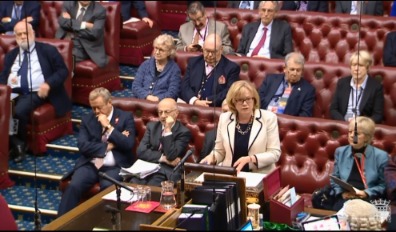 My Lords, the Prime Minister so often tells us that “nothing has changed”. But as the clock continues to run down to 29 March, it’s worth reminding ourselves that while Mrs May’s red lines haven’t shifted – with tragically predictable results – plenty of other things have.

We were told that there would be no “running commentary” on the Brexit talks, as that would undermine the national interest. And yet, a Prime Ministerial EU statement has become almost a weekly event.

We were told that “Brexit means Brexit”. But even now the Government still hasn't an agreed definition.

And we were told that “no deal for Britain is better than a bad deal for Britain”. Yet the Prime Minister has warned MPs that voting against her deal risks the UK crashing out - which she finally acknowledges "would cause significant disruption". We know it would be catastrophic.

But there is one area where nothing has changed.

Today we were given the opportunity to read an exchange of letters between the Prime Minister, President Juncker and President Tusk. So, what did we find out? Firstly, that the backstop is still a backstop. And secondly that documents continue to have the legal status they’ve always had.

The Prime Minister promised to obtain legally binding changes to the deal, in order to address the concerns of her backbenchers and the DUP. The advice of the Attorney General shows she has failed.

It confirms that while the December Council conclusions have legal standing, "they do not alter the fundamental meanings of [the Northern Ireland protocol's] provisions". And he's clear that today’s letter is only useful in terms of making a “political judgement" - a political judgement, not a legal one - "as to the likelihood of the backstop coming into force”.

I have two questions for the Noble Lady.

Firstly, does she accept, as it says in the letter, that the backstop remains "unless and until it is superseded by a subsequent agreement". Does she agree that comment in the letter from Tusk and Juncker is accurate.

And secondly, more than a month has passed since the first meaningful vote was pulled. Does the Noble Lady, the Leader of the House, believe it was worth the wait?