The facts of the matter 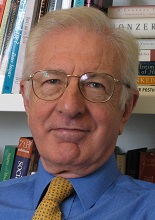 If you think Labour caused the deficit, think again. The Treasury’s figures will amaze you. They show clearly that it was the fault of the global financial crisis. Up until then, Labour had much lower deficits than the Conservatives when John Major was Prime Minister. Labour’s average deficit was 1.2% of GDP, while under Major it was 5.1% - four times higher.  Similarly Gordon Brown reduced the ratio of debt to GDP, while the Major government increased it.

The graph below says it all. It really is time the British public was exposed to these basic facts. Let’s explode forever the narrative about the “mess which Labour made”. 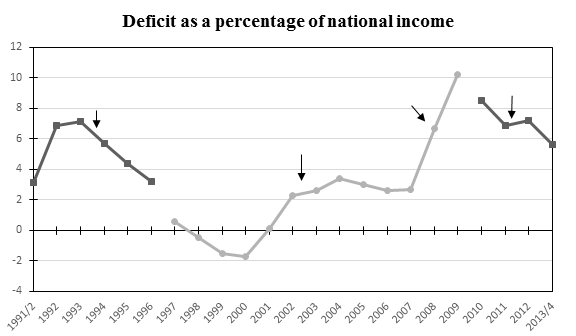 But where do we go from here? In the upcoming general election the future of our public services are at stake. The Conservatives want to reduce them permanently as a share of our national income.

This makes no sense from the point of view of economics, nor from the point of view of common humanity. As people get richer, their demand for health services and education grows faster than their income. That is a standard finding, and of course the demand for food and material comfort grows more slowly. So unless we charge people for healthcare and schools, public expenditure on these services should consume a rising share of national income, not a falling one. Similarly, as we become more affluent, we surely should spend disproportionately more on elderly care, child protection, and the local environment.

So what of the argument that what people most want is money in the pocket?

Last year the German Chancellor, Angela Merkel held a seminar in her office on ‘What Matters to Us?’, where she heard the evidence on what makes people satisfied with their lives. The evidence was clear. Variation in household income explains less than 1% of the variation in life-satisfaction. But the variation in mental health explains at least three times as much, and the same goes for physical health. Moreover, money spent on evidence-based mental healthcare gives benefits ten time greater than the same sum left in household budgets. Our greatest problems – including dementia, alcoholism, domestic violence and suicide – can only be handled by much more spending on health.

But why should a politician care about all of this evidence? For one simple reason, that voting behaviour is influenced by how satisfied people are with their lives. In fact, the evidence shows that this matters even more than the economy.

Because of the recession, our debts have of course vastly increased, but we really do not need to destroy our public services on that account. Our ratio of debt to GDP is now stable at 80% - well below its average level over the last 200 years. And, in the short run, cutting our public services will reduce our GDP as much as it does our debt. It makes no sense.

The scale of expenditure cuts which the Chancellor is proposing is a disaster, made even more absurd by their reversal in the final pre-election year. The plan has been ridiculed by all responsible commentators. It is in fact hard to believe that George Osborne and David Cameron would ever do this if they remain in power. But let us hope we are spared their experiment.