The Witchfinder General: a political odyssey 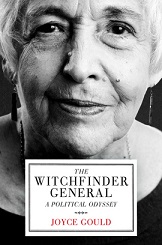 Joyce Gould offers a taster of her newly published memoirs

It was reaching the age of 80 that made me realise that I did have a story to tell and maybe I should write it down.

During the period when I worked for the Labour Party, I had the opportunity to engage in experiences I never thought would come my way. I met some remarkable and pleasant people, as well as some not so pleasant – something I’ve tried to illustrate in the memoir.

When reading the book however, people may be sorry to find that to get to some of those experiences they have to first learn more about my life before I walked over the threshold of Transport House as a full time official of the Labour Party.

Nevertheless, I hope they find interest in reading about what motivates me and what led me to my absolute and resolute commitment to the Party, and my belief that only a Labour government can bring about a fairer and equitable society.

I also wanted to show that the achievements in my political life went beyond my role in the demise of the Militant Tendency, other similar groups and those individuals prepared to disrupt the Party. As well as those who believed that the struggle was more important than electoral success.

Denis Healey told me of the frustration he felt, when in 1945 he found himself sitting at NEC meetings listening to the battles engaged across the table. 30 years later, nothing had changed. And that was my introduction to national politics.

I did not appreciate that I would play a key part in making Labour electable – a process that was made possible by those determined members of the NEC that things had to change. Some of whom are now colleagues in the House of Lords, but there were many others among the party membership who had had enough of being harangued and abused at party meetings. Not to mention the fantastic Head Office and Regional Office Staff who were always there to protect my back.

There were many times when that was necessary. Not least on my two or three times a week trips to Liverpool, where the infamous ‘Hatton’s army’ followed me from meeting to meeting. When I retired, an article by Michael White and Patrick Wintour of The Guardian said: “Ms Gould held down one of the toughest jobs held by a woman anywhere in British Politics”.

Baroness Joyce Gould of Potternewton is a Labour Peer in the House of Lords. Further details of her memoirs The Witchfinder General: a political odyssey can be found HERE