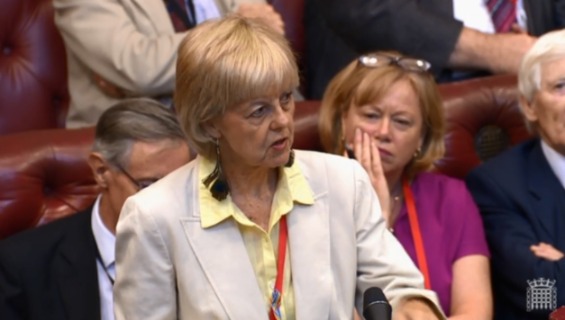 “Oh what a tangled web we weave, when first we practice to deceive”.

No, not the figure on the bus. But the Brexiteers and the government’s mantra that withdrawing from nearly half a century of an alliance would be “smooth and orderly”.

Indeed, so often did Ministers (even the Noble Lords, Lord Bridges) repeat “smooth and orderly”, that my researcher Chelsey Mordue got to writing S.A.O. each time she heard it.

The other deception was that a deal could be negotiated by the government alone, without business, the Opposition, trade unions – or Parliament itself.

I don’t normally to quote my own speeches but, on 10th October, two years ago, I warned Ministers that negotiating without an agreed mandate would lead to trouble. And I asked for “a vote on their negotiating objectives” since the referendum did not give them “a blank cheque” and that “the national interest – not just the Conservatives’ interests – must come first.”

If only the government had agreed to work with Parliament on the objectives for the future framework. Instead, they did everything wrong.

The Prime Minister laid down red lines in January 2017, before she understood the task, and with no involvement of Parliament. She refused to agree a mandate – as demanded by this House on the Monks/Lea amendment – which would have won her the necessary “buy-in” at the start of the talks.

She appointed Brexiteers to this challenging task. Men who refused to heed any evidence which countered their blinkered view; and who then walked away, when neither were able to negotiate a deal that either of them could live with.

Sir Simon Fraser, who saw it at close quarters, wrote that “David Davis was a terrible Brexit Secretary. He could hardly be bothered to go to Brussels, and rapidly lost respect there”.

We now learn that he still doesn’t understand the basics, writing just yesterday that “if we need to leave with no deal and negotiate a free trade agreement during the transition period so be it”. No, Mr Davis! Without a Deal, there is no transition period. We will have crashed out by the early hours of 30 March.

No wonder Elmar Brok – a leading MEP – characterised the government’s negotiating approach as “disarray and disaster”, if our lead Minister doesn’t understand the basics.

My Lords, the clock is ticking. The European Parliament will disappear in April, yet has to endorse any deal. Business is desperate to know where we’re heading. And certainty that we are not facing No Deal, which, as the City of London – which serves not just our economy but those of our trading partners – says, “would be in nobody’s interests”.

Terry Sargeant, UK head of ThyssenKrupp, said the Conservatives were putting their survival ahead of industry, describing negotiations as “a complete shambles. The Tory party aren’t making decisions for business, they are making decisions to prevent an implosion in their own party.”

Business, the Opposition, even the PM’s former aide, Nick Timothy judge the results a disaster, the latter accusing ministers of dishonesty. It’s now clear that “no one believes the proposal can win a majority in the Commons”. Given this, Parliament must have a bigger role over our future with the EU.

Firstly, we must state – in this House as well as in the Commons – that “No Deal” is unacceptable. We must have the transition this allowed for in the heavyweight document that we have.

Not only is No Deal unacceptable for the country, but the government’s technical notices indicate: 15 quangos either have to be created or a remit expanded, 51 bits of legislation by the end of March, and 40 new international agreements. And 55 new systems have to be set up.

Even that isn’t as bad as gridlock at Dover, Folkestone and Holyhead, the uncertainty for UK citizens abroad or EU citizens here, supermarkets lacking fresh produce and hospitals vital equipment and medicines, with vehicle manufacturing near stoppage, the end of data sharing and European judicial cooperation. We even read there are “army plans for troops on the street.”

My Lords, the government, has shown a dereliction of duty in getting us to November with no acceptable deal. It must now face up to its responsibilities and avoid a No-Deal crash.

One way is to rethink its Blind Brexit – a veritable “dance with chance”. It’s no good throwing all the possibilities up in the air to watch which way they fall. Or we risk another Groundhog Month, in December 2020, when we again don’t know the future.

More seriously, the government’s 6½ pages provide none of the requirements for a future close economic and security relationship with our allies and near neighbours. Indeed, it contains a mere 3 pages on our economic relationship with the EU – our major trading partner, market and supplier.

As it stands with that future outline, we would be completely out of any Customs Union in 25 months’ time, England, Wales and Scotland would be out of the Single Market and with no alternative. It contains no aspiration for frictionless trade, no assurance on common security or on the European Arrest Warrant, and no undertakings on Agencies.

Worryingly, it allows for the hardest of hard Brexits. That my Lords is a future the Opposition will not countenance. We have always prioritised a close economic relationship with the EU and thus cannot accept a Political Declaration with no aspiration – let alone guarantees – about this.

Especially as there is an alternative on offer. Sabine Weyland says the agreement “requires the customs union as the basis of the future relationship”. A welcome starting point. But more is needed.

Instead, we are faced only by an “outline” of the Political Declaration with “negotiations of the full Political Declaration” continuing, promised “by the end of November” and with an undertaking next year “to negotiate expeditiously the agreements governing the future relationship.

The government must sit down now with business, with unions, and with consumer reps – sadly excluded so far – to find a way forward. And it must heed the objectives outlined by the Opposition.

This House won’t need reminding that it is 28 years ago today that Mrs Thatcher lacked sufficient votes to defeat her challenger – in those days, assassins knew how to be assassins. Perhaps DUP MPs still do – judging upon last night. So we look forward to the maiden speech of the Nobel Lord, Lord McCrea.

My Lords, today Parliament, and the Opposition, warn this Prime Minister: take us with you over these negotiations, build a proper consensus, for the sake of the whole country, at this highly momentous time.