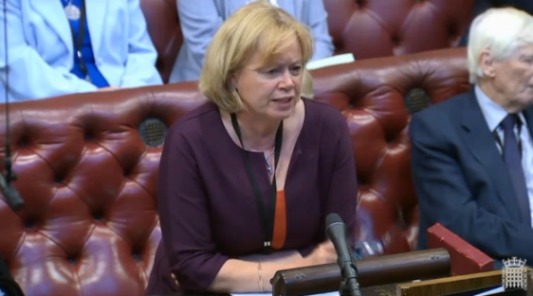 Angela Smith speech in the House of Lords, 28th January 2019

My Lords, I'm grateful to the Noble Lady the Leader of the House for her contribution and her motion today. Although I'm not sure she said much about what we are expecting about the deal that we thought was in the motion. She did say that we were taking stock, which I have to say if we take stock to where we have got so far it doesn't take very long.

There are huge amounts of legislation still required prior to exit day and I have to say to the Noble Lady that at times her comments sounded like a bit of a lecture or a ticking off to Your Lordships House. Can I say that I think we should all be grateful to Noble Lords from across this House who give up their time and their expertise to scrutinise both primary and secondary legislation.

My Lords, in debating both motions together for convenience of the House, and I will speak to my motion and move it at the end of today's debate. And I will test the opinion of the House - although there are some things in what the Noble Lady said that imply that she may be able to accept my motion and I hope that will be the case if the government could indicate that. It would be very welcome. I live in hope, I'm one of life's optimists.

Following the result of the referendum, few could have imagined that over 30 months later there would still be so much division and so little agreement.

I made the point last week, on our motion about information required to complete consideration of the Trade Bill, about how often we were told how easy it was going to be. How, for example, our existing trade agreements could be rolled over in an afternoon, and new deals would be in place, apparently, one second after Brexit. Yet, here we are, 60 days to exit day, with our country more divided and more frustrated about the political process than ever before.

Despite stark warnings including from businesses, the NHS, and from food producers and suppliers, the Prime Minister continues to refuse to take even one step towards ruling out the most damaging and catastrophic of outcomes - that is crashing out of the EU. Instead, Mrs May is seeking to use it as a bargaining chip with her MPs, to try and force through a deal that has already been resoundingly rejected. And as I remarked previously, the Plan B that the she has offered seems remarkably similar to Plan A.

Despite offers of talks and parliamentary engagement, there has been no real attempt to seek wider support or build a consensus.

Since the referendum, YLH has heard many contributions on the detail of how the Government should give effect to the outcome of the referendum:

We’ve also had regular statements from the Prime Minister most Mondays, repeated in this House.

At every point this House has sought to be useful, with many of our suggestions and amendments – including on issues such as Northern Ireland and our future relationship with EU agencies – ultimately being accepted or just slightly amended by MPs.

I often reflect on the Withdrawal Bill amendment from My Noble Friends Lord Monks and Lord Lea, who sought to persuade the Government that the Prime Minister should engage with Parliament and seek a mandate for her negotiations. Because that way she would have had a better idea of what Parliament would accept, and that would have strengthened her hand. Instead, she chose to go it alone with a predictable rejection, although the scale of that rejection was astounding. And time is now running out.

With the clock ticking down, and MPs voting tomorrow to seek a way forward, how can we in YLH be most helpful?

The legislation relating to the Meaningful Vote was initiated in this House, and that's clear. It is the responsibility of the elected House to hold that Meaningful Vote on whether to accept the outcome of the Prime Minister’s negotiations. And it remains for the elected Members of Parliament to decide.

As we draw closer to the exit day, it’s clear that Mrs May has failed to find acceptance for the withdrawal agreement and the political declaration that she has negotiated, losing the vote in the Other Place with the largest parliamentary defeat in living memory. However, despite the urging of colleagues across the political spectrum, the Prime Minister continues to raise the spectre of leaving without any deal or agreement.

It is true that it is not entirely within her gift to guarantee a deal. But Mrs May could – and I believe, she should – send a clear signal to the EU27 that all possible steps should be taken to rule out a chaotic and reckless no deal exit.

There will be different views on who must take the responsibility for getting to this stage with so little clarity, so little agreement and so much division across our country. But that’s for another time. At this stage a way forward has to be found.

So, the Motion is my name today is in two parts.

Firstly, it’s a factual recognition of where we are. YLH has been clear about our position on a crash out exit when we voted by a majority of 169 to reject that as an option. And MPs have resoundingly rejected Mrs May proposals. It's probably also worth noting that the House of Commons passed an amendment to the Finance Bill to limit the Government’s powers in the event of no deal.

Secondly, my Motion proposes how we should respond to the next steps taken in the House of Commons, which in some ways should just be taken as read but are worth restating. It may be that following their debates and votes tomorrow they are no clearer how to proceed or a way forward. But it is also possible that MPs may agree on a way forward – either a conclusion, or a process to reach a conclusion.

Time is running out, and if in the few days that remain, the elected MPs through the motion and amendments for debate tomorrow find a course of action that has majority agreement, we must respond positively to that.

Once we accept the premise that crashing out is too damaging to the UK to seriously accept, there are few options remaining. It is for our elected colleagues to decide at this stage which option they wish to pursue from those tabled including:-

The Labour amendment they will debate restates our policy of rejecting a no deal outcome, seeking a permanent Customs Union, and negotiating a strong relationship with the Single Market which recognises the importance of EU-derived social protections. And it acknowledges that Parliament may have to seek further approval from the public.

A number of other proposals are on the table. Some make requests of the EU27, particularly in relation to the backstop, while others ask the Government to pause for further reflection instead of deliberately running down the clock and crashing out.

Tomorrow evening, we may know what our elected colleagues want the Prime Minister to do next. That is, quite rightly, a decision for them and them alone. My amendment merely reiterates the stated opinion of YLH in relation to no deal - while making clear that if the House of Commons agrees a course of action that requires new legislation, both the Government and this House should facilitate the passage of that legislation.

It is nothing more my Lords but they expect nothing less of us.

So I hope Noble Lords that the Leader and the Minister will respond positively to my proposals today. But if they fail to do so, I will move my motion and press it to test the opinion of the House.